At the beginning of this period, fashion very rapidly changed from the stiff Georgian styles into the soft and flowing Directoire dresses, somewhat imitating ancient Greek clothing.  Stays were discarded by the most fashionable ladies – for a short while.  By the beginning of the Romantic age, tastes gradually shifted into harder and more angular lines.  Wide skirts and wider sleeves, plus constricting corsets became the rage.  The fabrics they used changed accordingly.

Who wore what types of fabric also changed.  What was fashionable with the upper class one year might be considered far too common the next, when the middle class was able to buy it.  Machine-made lace became popular during these decades, fashionable at first, but becoming less and less expensive.  Many lace makers were put out of work before handmade lace became fashionable – and extremely costly – again.

Some materials were considered appropriate only for the working poor.  And the cheapest, roughest, worst-woven fabrics were deemed suitable for poor house inhabitants and slaves.

From Abaca to Zig-zag, the fabrics and their uses make fascinating reading.

-- No illustrations or color plates.

In paper back at Amazon.com

Fabric à la Romantic Regency:
A Glossary of Fabrics from Original Sources from 1795 – 1836

And for Kindle at Amazon.com

Fabrics à la Romantic Regency is intended for the use of costume historians, literary scholars, Regency enthusiasts, Regency re-enactors and dance enthusiasts, historical writers and history buffs.  Anyone who has questions about fabric from 1795 to 1836 will find many answers in these pages.

You will find modern sources that define many of these terms.  Those definitions are correct – for certain decades, years, or sometimes only for certain months.  This book provides a series of snapshots of the terms used in fashion.

This glossary covers English fashion fabrics from the Directoire, Empire, Regency and Romantic eras.  It also covers many French fabric terms as recorded by the English.  Other fabrics were imported, and were often named for their area of origin, such as Madras, Calico, or Nankeen; Indian silk, Italian net, or French lace. 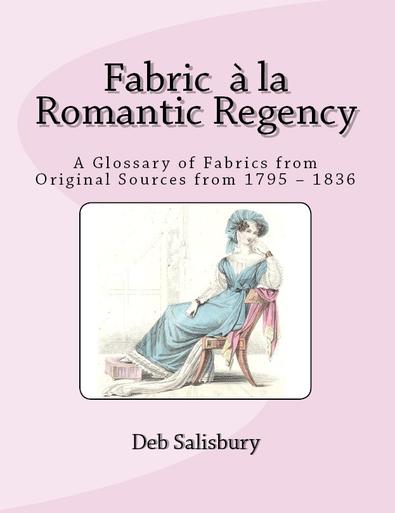