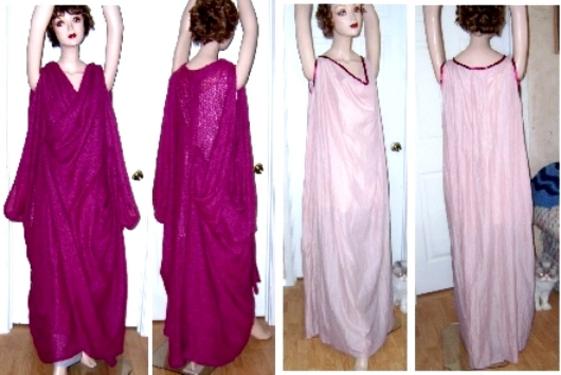 Super simple construction!  This dress would have been worn at home, or as visiting, reception, dinner or evening wear, or as a masquerade costume. Artistic dress was intended to be loose and natural. It grew out of the Reform and Aesthetic Movements, where both men and women tried, with limited success, to introduce rational clothing for women. Part of the point was to abolish corsets – or at least encourage women to avoid tight lacing.

In some circles, Grecian-style dress became very popular. It could be used as ball gown, party dress, or dinner dress. In these venues, at corset and a bustle might be worn. The combination of Greek dress with a bustle often produced politely-concealed (usually) amusement.

Different versions of classical Greek dress were often used as fancy dress in masquerade and tableaux costumes. Morning, Butterfly, Agriculture, and Art were popular in classical dress, as well as Hera, Artemis / Diana, and most other Greek and Roman goddesses.

This draped over-dress would be worn over an under-dress, so I’ve included an optional, very simple under-dress pattern based on a written description.

It includes 12 pages of instructions with historical tips and quotes, and 3 pattern sheets. It is printed on bond paper, and enclosed in a reclosable plastic bag.

No. 1880-29
Classically draped dress  with a simple under dress.

Used as Artistic Dress or for Fancy Dress Balls.

Based on Classical Greek dress as part of the Movement for Reform Dress. 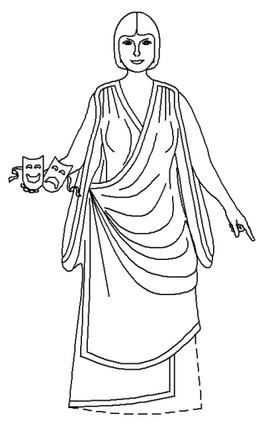